FARZI “  is a phenomenon that can only be felt and experienced !!! The experience is a fantasy which is beyond words ……..It’s an emotional extravaganza which creates an aura of culinary delight around us…….
After creating a lot of curiosity and hype on the social media since last 2 months…….finally the wait is over…. With the opening up of the ‘FARZI CAFÉ” at Cyber Hub, Gurgaon….on 20th July, 2014….
Always wanted to experience the creations of molecular gastronomy……in which avant-garde cooking techniques and equipment are used to transform flavors and presentations. This is also termed as “progressive cuisine”….in which many new techniques like spherification, gelification, airs, foams, smoking and molecular mixology are used. Molecular gastronomy always results in an unforgettable and surprising experience because molecular cuisine is not simple cooking...This highly original cuisine is a new cooking style where by talented chefs explore innovative culinary options which embrace sensory and food science and technology…..

I will not call this write up a “review” in any sense as a review is only possible when a restaurant has completed a minimum of 2  months and all the processes are streamlined and things are already in the groove….
FARZI CAFÉ is brand new take on “Modernist Indian Cuisine” which is the need of the hour….Indian Cuisine in real sense is one of the most vivacious and sought after cuisines of the world….but where does it lag ? Hmmm… that is the real issue!!! It lacks the “pomp and show” i.e the presentation and feel. We are being served the same old dishes for so many years now.. that people mostly the young crowd has taken a different route and switched to other cuisines in the recent years.

FARZI CAFÉ is a Bistro – A café in its true sense with inclination to fine dining….

In real sense at ‘FARZI CAFÉ’  they mean “ Illusion” which has been created by the well known restaurateur Zorawar Kalra son of celebrity food writer and chef Jiggs Kalra (I am a fan of his cooking since my childhood) and his highly talented young chef Himanshu Saini…….

I felt honoured when I was invited by them to the Bloggers Table for a tasting and showcasing session by  Mr. Kalra and Varun Duggal himself.

As I entered, I was taken aback by the look and feel of the place…… very unique and eye pleasing…
The use of Wood on the ceiling and the floor create such lovely feel …..the tables are in teak wood… The chitter chatter sound of walking on the real wood plank floor is amazing……They have one of the longest running bars in town (50 odd meters long).. Liquor license is awaited …. the use of Faux grass on the walls brings nature inside the walled interiors….. The classical yet modern outlook which has gone into the making and designing of this place shows……The sculpted birds and bird cages on the wall create a fresh feel….The encased windows  that open up to bring the outside world feeling inside the café..They have also designed an elevated stage for the live bands and other fun filled activities…. It’s not a regular café…It’s a Café with deep Indian Roots……

Now the most important….aspect of this discussion…..

I spoke to Chef Himanshu before starting the tasting session…. And I was surprised by the talent and the amount of zeal and enthusiasm this lad has…… ….”This project has been on our mind since last 8 years and for last 8-9 months we are working on it day and night..” Zorawar added
He and the very passionate Mr. Zorawar Kalra, did many rounds of food trials, experimentations and innovations   before they could finalize the menu… and this process is ongoing...

We started with the first illusionary marvel i.e. the Amour Bouch or we can call it the Mishti Doi Spheres (made by reverse specification) sprinkled with the panch poren mix and a drop of strawberry coulis , which bursts into your mouth and fills it with fresh and sweet flavors ...This comes complementary for the customers …It is a real good start to the eating journey…..
As we all love chatpati chaats…..keeping this in mind they have created a Mini Raj Kachori the size of a big Gol Gappa (paani puri) with Crispy Okra Chaat ( yes Bhindi ..ladyfinger as we all know ) and Sounth (red meethi chutney) Foam….yes foam which was airy and frothy full of chatpata flavors…… I loved it…
Next item was a real shocker ….it was a plate full of Choorma or we call Panjeeri in Punjabi ( powdery texture )… When I tasted it …It came out to be  our very own Bhelpuri… but with a twist… It is created by blending the ingredients with liquid nitrogen in a blender… Its very very unique and is going to be a game changer….. I suggested them to keep its crunch intact ( my view) …. They call it Bombay Bhel version 2.0……

And the Ultimate transformation of the Vada Pao ( Maharashtrian) into a Pao inside the Vada.. Yes this is another example of “Farzification” wherein Pao is inside the Vada ..made in a form of Aloo Bonda or a Ball…. Lovely I must say… perfectly balanced flavors..
I was served with a very nice and refreshing drink called Farzi Ok…which is a concoction of orange , peach and other refreshing flavors in jar type container which is very in nowadays……

We all must have had Sarson ka Saag and Makki ki Roti (specially north Indians)… but how many have had it in the form of a  Galawti Kabab….. Yes… one more shocker the Sarson ki Gilawat with mini corn filled rotis or tostadas and yes the most awesome Chaach Spheres ( like  mishti doi ones) … So u get Sarson ka saag… makki ki roti and Chaach on one plate….. WOW ….I can imagine the amount of thinking gone into all this ……
The craving for the meat was starting to build up….when I was served with a dish in a bamboo steamer but it was not steamed...it was fried and tossed in a sweet chilly sauce….It was our very own Samosa filled with Duck meat and my goodness ..it was finger licking good and tasty…..
Have you ever even imagined , Kashmiri cuisine fusing with American spare ribs (pork).. Yes it has been done already at FARZI CAFÉ…. The Chilly Pork Ribs (imported) in Kashmiri Rista Reduction … Falling of the bone meat and taste so heavenly ..cannot be described in words ( I am drooling , sincerely)
The Chef asked me at the start for any allergies to specific foods….and I told him that I am allergic to prawns, squid  etc….. But I was shocked when my table was served the Kalamari which we usually associate with squid….. I called upon the manager and told him my concern….. He smiled and said, that I can go ahead and taste the dish with no worries at all….. I smelled the  “Farzification” in that dish too… and tasted it…. My oh My…. It was so good… and the flavors were coming so well…. You all will be shocked when you come to know about the dish………………….. It was “Karela” Hahahahahaaaaaaa…Our very own Karela (bitter gourd) transformed into Karela Kalamari ( tempura in mango chutney)… crispy,sweet and sour and tangy….  STAR of the Show….. Salute to the Chef and the Team…

How can I forget the Galauti Burger which was served in red suitcase like box…… The Bun was very well made and the Galauti melt in the mouth with the roast tawa boti in it… It was so soft that I had to eat it like I was having pav bhaji….all opened up and desi style…..

I am a passionate eater but I was overwhelmed with the number of dishes being served that I had to only taste some of them and move on… or it would’nt have been possible to savour so many…..
Before the main course , I was served with a lovely chilled Hajmola flavored Lollypop... which was well presented in a  book type box and tasted yumm .. It is served so that we can digest and make space for more to come…. Lolzzz…..
Chicken tikka masala and a crispy butter naan was served in a Telephone Booth prop which signifies Britain specifically London coz it is treated as the national dish of Britain and is also on the Queen’s menu too……. The taste of the gravy was very unique and flavors were very different from the other places……It was very good too…
“Maggi “yes you read it right Maggi was the next dish served…..STOP… It is called the “Posh Maggi” our humble 2 minute noodle in brand new avatar…. Maggi cooked in Trufle Oil….with many other surprises was a killer……..
Arrey bas yaar……. I know your mouth must be watering….. I am drooling too…. But now its time for the Desserts….
I was served with the Nasik Orange and Kafir Lime Aire ( froth made from orange juice and lime leaves ) served in scooped out whole oranges…. It vanishes in your mouth leaving a sweet,fresh and subtle flavor of citrusy oranges and lime leaves……Innovation at work..
Last but not the least, this was amazing ----the PARLE-G Cheesecake …. Yes apna bachpan yaad aa gaya kya? The Re. 1 pkt which we bought in early 80’s for dipping in the milk or tea…..Nostalgia at its peak…
Cheese cake sandwiched between 2 Parle-G biscuits served on a bed of  Rabri (milk custard) with Cadbury Gems adding color to the plate…… WOW is the feeling …. It was awesome …the cheesecake was very good and the Parle –G biscuit  complemented it so well like a marriage made in heaven…. And the flowing custard was lovely…..
To end the meal , they serve you with a very popular version of the dried pan with a new twist again… “Farzification” ke bina baat nahin banti yahaan par bhi..…  This Pan is in the form of a Gujiya….. dehydrated Pan filling inside a cotton candy shell (Gujiya Shaped)…..

All in all a very well crafted menu from Zorawar Kalra and his team especially Varun Duggal ,who have worked day and night to nurture this dream and bring it to reality. The very talented Chef Himanshu Saini has worked wonders with his creations using technology and science without losing the very essence of our Indian cuisine and taste……….

It’s the fun factor which is getting associated with the food ….It’s this form of culinary show with classical dishes that will slowly take you into a food fantasy , I must say in a true sense……… So sit back and relax…..Let the magic of “FARZI” unfold……….. 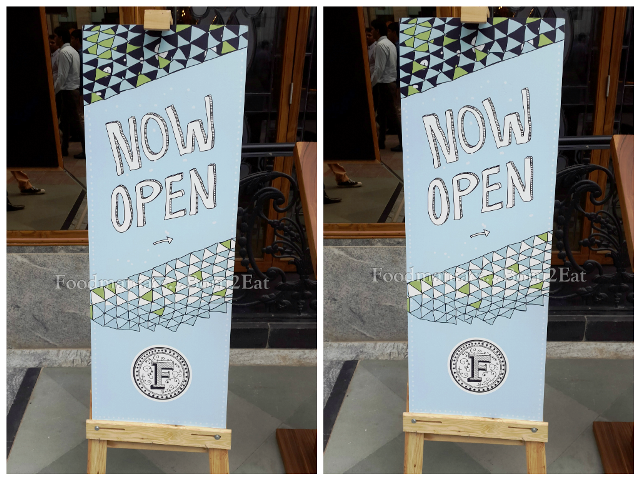