The city of Gurgaon boasts itself to be the melting pot of Cultures.

The truly cosmopolitan small town of yesteryear's has transformed into a truly happening city.
People from all over the world and all walks of life have made Gurgaon their dwelling pad.
This equation has resulted in advent of hundreds of food joints from High end fine dining to food trucks and Classic street foods to many outlets serving region specific foods.

In continuation to this growing trend alongside the vertical and sideways development of Gurgaon we have witnessed a new baby on the circuit.

We had a chance to visit “The Ancient Barbeque” TAB in short for that matter of sorts.


TAB is located strategically at a place which can easily cater to the clientele from all directions.

It’s on the second floor of the complex and has around 120 pax seating plus it also boasts of open terrace ideal to host around 70 people…this terrace will be a highlight in the coming winter months….


The Décor is very subtle and will call it a decent one…NOT too overboard. The feel was both warm due to the use of dark colored woods and teak finish combination  and on the other hand side walls with a waterfall were soothing too…As you enter the place it gives  feeling of a large and well designed place......The open kitchen , see thru glasses also creates a feeling of expansiveness......

This heady mix actually helps in relaxing and bonding with your food. The place was bustling with activity when we entered, with young and not so young alike thronging the place.

We were immediately ushered in at the table of our choice and had attentive servers for us. One thing which was very obvious was the enthusiasm with which we could see the staff taking care of the activities.

Now the food which we were there for:


We had Paneer tikka to start off with, mildly flavored but not too creamy but very soft.


The chicken tikka were very soft and subtly spiced and then getting them very hot from the skewers itself enhances the taste!!! The very sight changes the way to feel the food. It is in itself a soulful feeling…….


Though the star of this starters show was the Rasi misi mutton chaap, now rasi misi means the grilled chaap with a coating of masala, The meat was coming off the bone easily and were marinated as they should have been retaining the original mutton juice……

Yes to add was grilled pineapple which helped us as taste breakers between the two different snacks…..like a palette cleanser to be precise…Now when we are on a tasting spree we surely need to have a taste breaker otherwise we cannot get the feel of different tastes one after the other. A plain Roti otherwise serves as a good taste breaker…..works for me …..

The fish tasted fresh, I think the Fish used was Baasa……but of real good quality and  bite…their were prawns too.....

The greed was overpowering, the more starters poured in the greedier we grew. This is the power of live grills…..BBQ smoke makes you drool…..

One Soft Drink / Mocktail is served complimentary with each meal, so it means that for a family of four you end up saving more than 600-700 bucks in your bill....

How long will they continue with this freebie has to be seen…..they say they will……It’s good…. And I must admit, the quality of the cocktails is superb……they are complementary doesn’t mean they are just run of the mill stuff……not at all…They are very well mixed and presented to you…. The mixologist at the Bar has magical hands ….

We tasted almost all the Mocktails like BBQ’d Projkas, Virgin colada, Rapchik Mango, Cranberry Blossom and one or two more…..all of them tasted very different and very good…..You can order a different flavor for each member of your family and taste all of them ……Just a suggestion BTW…...
Very soon we can savour the cocktails and other hard liquor too as they informed us about their liquor license which is expected soon........

Salad spread is laudable.…vast spread with both options veg as well as non veg at least 12-14….I tried the Mexican fish salad and the tomato and cottage cheese salad…both were awesome…..could not savour more of them as there were many….and we had to have other things too…….. 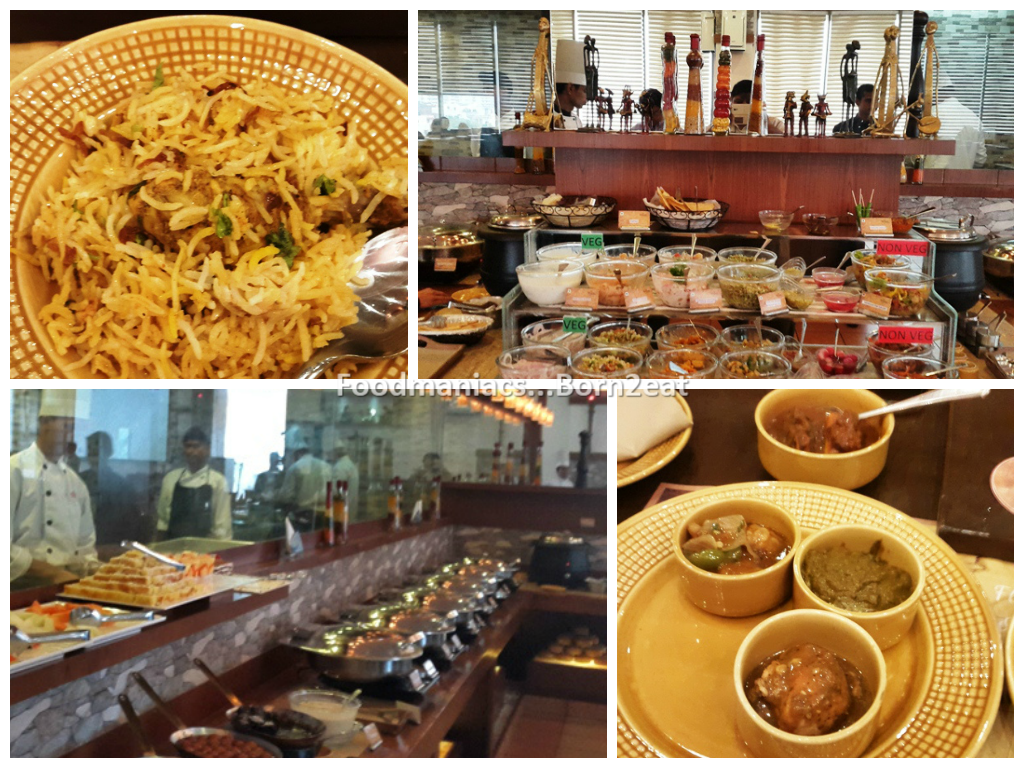 We could have gone on and on but then what about the main course. We had to then reluctantly go in for main course which was extensive in both Non veg and Veg formats.

The menu changes frequently. They have Indian, Chinese as well as Continental dishes on their menu…which is a USP, i must say ……

On offer that day was Mutton Rogan Josh which was and cannot be coined Rogan Josh by any standards…..I would say it was a Punjabi cousin of Rogan Josh….


The Rice to accompany were Biryani (chicken) and steamed which were nicely done up.


The Biryani was flavorful but not the one cooked in Yakhni ……..The texture of Biryani was a dry one which some who shun oil may prefer but for me the one with a moist texture does the trick….it was good though…


The chicken curry was of my liking, tickling my taste buds with that burst of right mix of masalas….


The Fish in black pepper sauce and Roast chicken in mushroom sauce were awesome….very nice flavors and well made…..I loved it really……

The Veg. menu was extremely beautifully done… Dal  Makhni very creamy in texture and with right kind of spices and not made rich with use of excess creams and butter as we normally encounter at many places……can be had twice , thrice as was not too heavy….


The Bhindi Masala (do pyaaza) was Okras in a decent coarse masala dry gravy kind with small shallots in it…lovely I must say….the paneer lababdaar (lahori) was luscious and yummy…very nicely made…..


And yes the spread had some continental as well as chinese preparations in veg. too…..like Mix Veg in Chilli Oyster Sauce , Veg Hakka Noodles, Veg Au Gratin (well made) and oven roasted potato….and much more….


Main course had many other tempting dishes but could not or rather say was not inclined in checking them all out because the sweet tooth of ours was asking for and looking at the spread in the neighborhood……lolzz…. 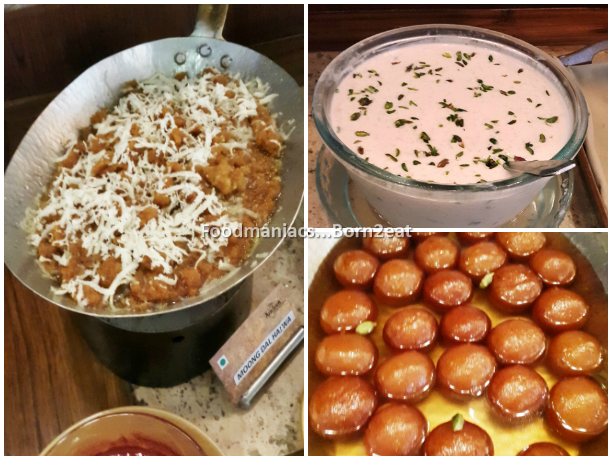 I tried Gulabi Kheer which was almost like a Phirni, loved every spoonful of it with closed eyes Oh heavenly delight…….the moong dal halwa and gulab jamuns were authentically made and tasted real good .The continental desserts like cakes, custard shots, brownie were good too but I like the coconut fudge most…moist pieces of heaven…..loved it thoroughly…..The Death by chocolate (brownie and ice cream with choco sauce) was worth a try……. 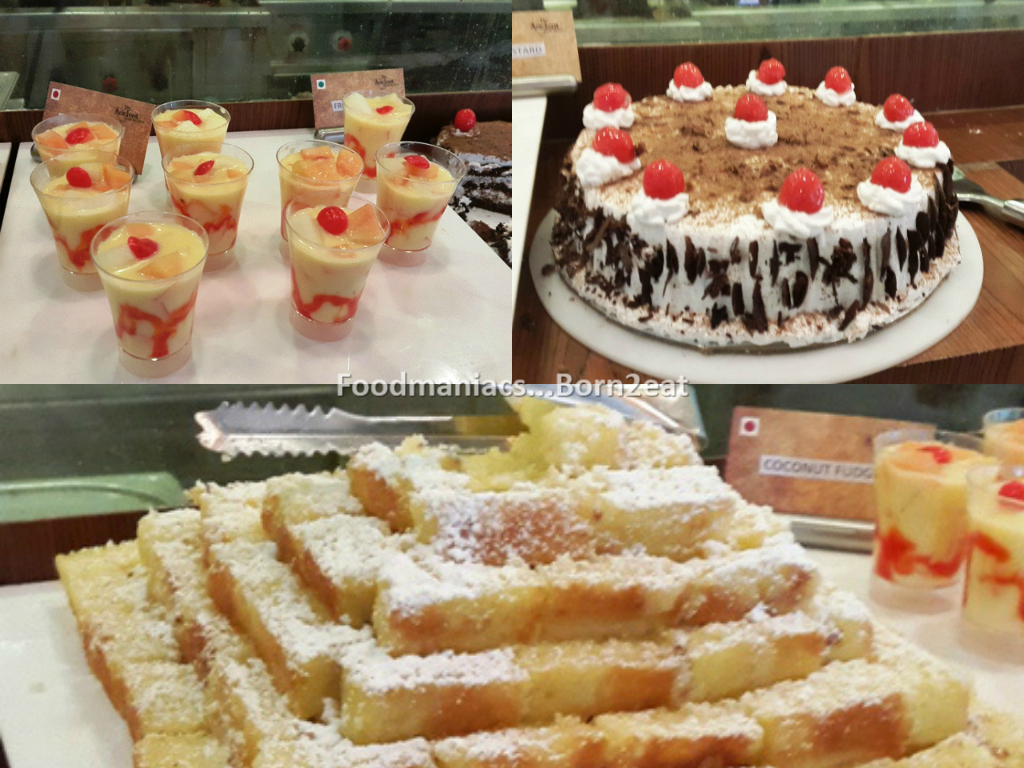 Now what about the service:

As I mentioned earlier Customer service and customer service with enthusiasm have two different meanings altogether. Here we could visibly see and feel the enthusiasm which I think is a rare virtue now days…….


A small negative about food is easily scored upon by a beautiful and  passionate service…..Yes it is true…..

Chef Nikhil the Mastermind of the show was all attentive and a good listener, would say did not give a lame reply for the quality of Rogan josh, but yes asked us to come over again and taste the change……..

The feedback should be absorbed all positively which he did and it showed in his gestures and words……Keep it up !!!

The staff were too hospitable and friendly with customers , for which we should appreciate the Manager in charge Mr. Vineet Arora , who is a charming fellow. … and an experienced gentleman….

We spoke to the young owner (partner) Mr.Rahul Yadav too. He said he is learning a lot new things, which is a very good answer as the learning process should always go on …..whether one’s age is 25 or 50 ……. I found him to be an intelligent and grounded person……who is taking good care of his baby (TAB)…....

They have also introduced live singers at dinner time everyday..... Wow i have to visit at dinner again to experience the lovely musical ambiance soon....... 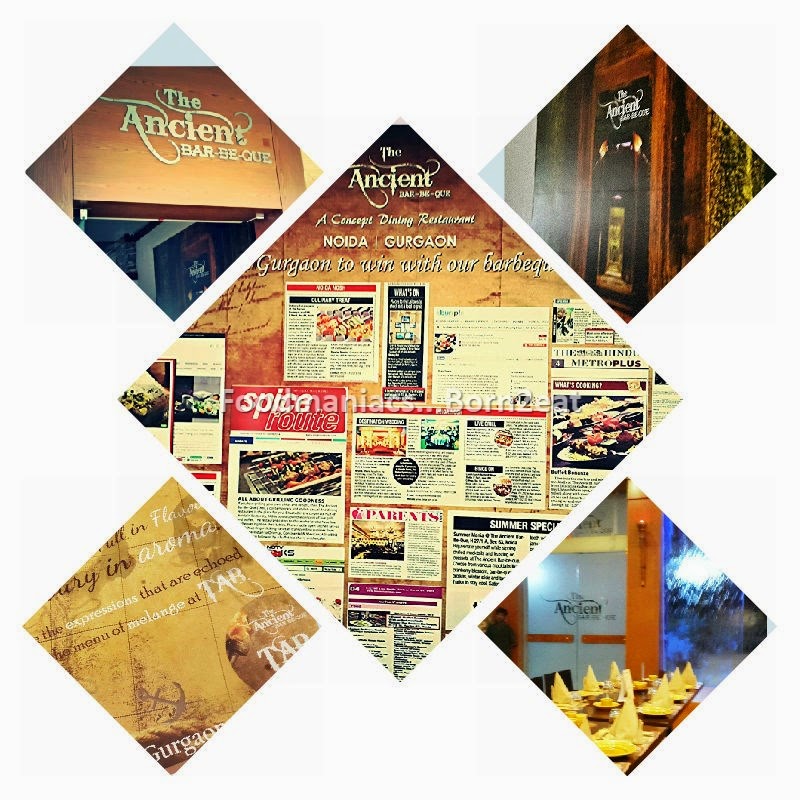 I would as of now easily say that TAB- The Ancient Bar-Be-Que……….is an old wine in a new bottle…..which has been very well planned and executed…… We wish them all the best for the future….. Maintain quality and deliver consistently……