Of all the places on the planet where the popularity of Japanese Food especially Sushi would seem to be a strict no-no, Delhi region would once have been at the forefront. Indeed, in the era before sushi, the average Delhiite was never keen on seafood, even the cooked variety. Which is why it is surprising that sushi makes its way on to so many menus. Today, sushi and sashimi are ubiquitous. Not confined to five star dining any more, even caterers have begun to get into the act.

So, is the Delhi/Mumbai love affair with sushi part of a global trend? It probably is. Japanese food, with its accent on superior ingredients cooked minimally so as to retain freshness, has been at the forefront of international culinary interest.
Asparagus, lettuce leaves, cucumber and nori sheets (made of sea weed) counterpointed against rice can look poetically beautiful, as long as the hand that has created them is neat.

When it comes to food, the Japanese are among the most enthusiastic and passionate of any races. Careful preparation and meticulous presentation are crucial elements of Japanese cuisine. Food is an art form and even the simplest dishes are often prepared by chefs that have trained for many years.

Today's generation is independent and wants to experiment with its food. People nowadays have become more enterprising and independent in their tastes. It’s a similar scenario in most metropolitan cities like Mumbai, Delhi/Ncr, Bengaluru etc.  Where youngsters are leading the change - some out of curiosity, others just to be fashionable.


Japanese cuisine is proving to be a hit among culinary enthusiasts in India, especially the young and the health conscious - even though many of the ingredients have to be imported, making it an expensive proposition. It's light, uses fresh ingredients and is different.

And the love for this cuisine it lead us , TWCI – The Writers Collective of India to a newly opened restaurant KOA- Kitchens of Asia at Cyber Hub, Gurgaon .
It was a chilly evening, with cold wind blowing bringing temperature down. But our enthusiasm and passion got us all gathered at KOA for a lovely dinner. The interiors of the place have been done very nicely, imparting an oriental charm to the whole place. The artifacts and paintings of Buddha imported from Japan, the use of red colour on the walls and upholstery as well as napkins brings in the warmth to the whole ambiance. It’s an 80 odd pax. restaurant on the First floor of Cyber Hub, the most sought after location in Delhi/ NCR for restaurants and dining nowadays.............. 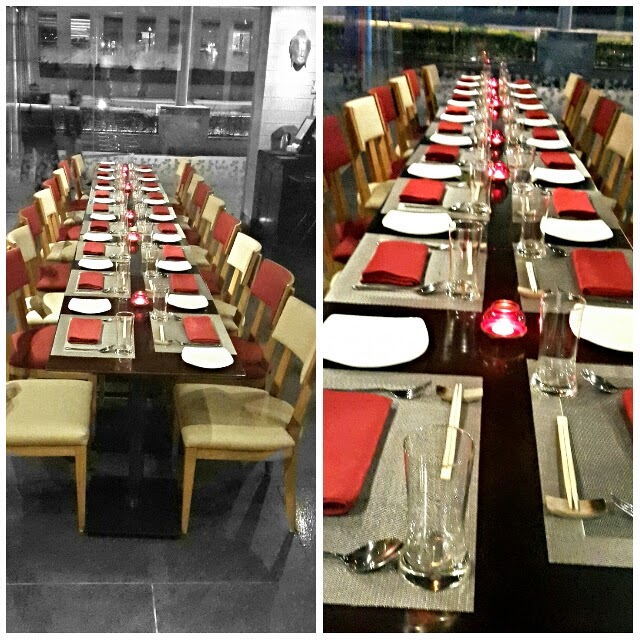 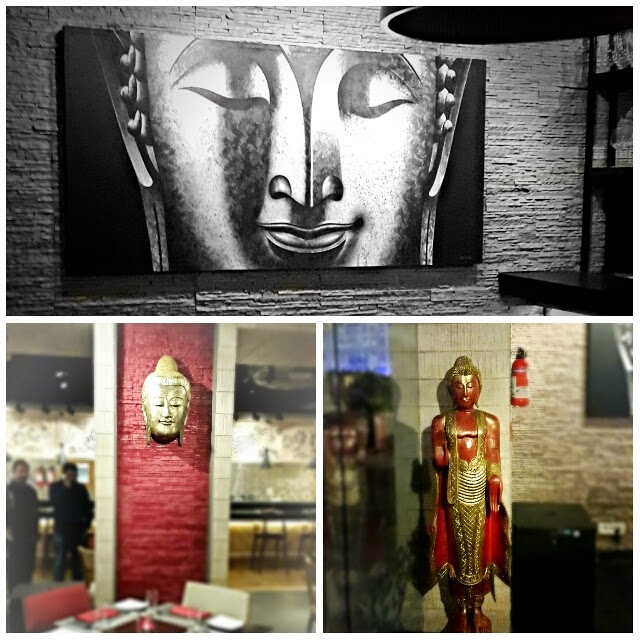 As we all reached the place, we started chatting and discussing about the ambiance and type of food we will be served. It’s a Japanese restaurant with open kitchen and grills. The Robatayaki grill and Teppenyaki cooking are done live. They also have a private dining area which boasts of a live teppenyaki which is yet to be operational.

Now, the agenda of our meet, the food. We started with Miso soup (Rs.295 /395) – both veg. as well as sea food which had  mitsuba, tofu and wakame seaweed. It was very different, it’s obvious but yes it was very refreshing.

Then we got robata chicken (grilled on robatayaki grill) and vegetables like asparagus (Rs.595) with yulu hollaindaise and soy, corn on cob ( Rs.375).I loved the asparagus , the flavors of soy and other sauces grilled on charcoal were heavenly. The Chicken Breast (Rs.475) was also done on the grill and was very good and yummy served with grilled vegetables.

Then we were served the Potato Suteki (Rs.475), a panko (bread crumbs) fried potato steak with tankashu sauce. It was like a whole potato stuffed with cheesy mix and fried coated in bread crumbs (panko ). It was very subtle in taste but filling……... I was waiting for the Shir’Ae which is a crumble of silken tofu, spinach goma dressing. Very beautiful and very tasty. It’s such a dish which you won’t even like to break apart as it’s so beautifully presented and plated; it’s almost a work of art.

Now one of the most popular dishes from Japan, the tempura or we can say Japanese pakode…….. deep fried veggies or sea food in a tempura batter…….I did not try the tempura but my friends really enjoyed the Prawn tempura (Rs.675)  a lot……

And now the most awaited and most known to dish from Japanese cuisine, The Sushi…….. We were served with various Sushi preparations or as they call them, Rolls…….like  Come Undone -spicy tuna (Rs.675)  asparagus (Rs.545), spicy salmon (Rs.575)…...Sushi was done two ways both nigiri* and maki* rolls were served……Rolls of rice , yes rice plays an important part in sushi. Most restaurants make do with koshihikari rice; Wasabi has koshibuki in addition. The former is for nigiri sushi and the latter, being a premium quality, is for some maki rolls…….. 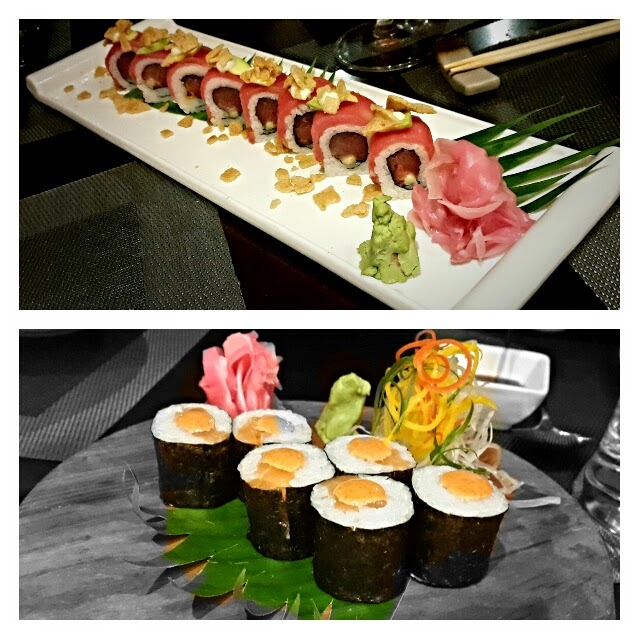 All very nicely done and presented, with use of vibrant colours and luscious textures. We loved all of them; I even ordered an extra dish of classic sushi maki rolls……..

Then came the Teppenyaki dishes like chicken teriyaki teppan grilled chicken Japanese soya glazed with simagi mushroom & wakame (Rs.675). The slow cooked red snapper (Rs.695) , assorted vegetables, spicy with balsamic reduction sauce was one of the highlights of the day……And the most authentic the Black Cod Miso (Rs.1895) …… This was the one which I loved much; it was sweet and flavorful very unusual and very good but expensive too…….


You will be surprised to know that, the Japanese also eat curries like Thai and Chinese. We had the KOA Oriental Curry Veg (Rs.525) which was awesome and tasted much like Indian and Thai style curry. The use of cream instead of coconut and herbs made it really interesting and was fun having with steamed sticky rice……..

The most sought after fish, the Salmon was the next to be served. It was again prepared on the robata grill served with grilled veggies – Salmon Steak with lovely mix of sauces and honey ,very healthy and very fresh. I can have it every day………..Awesome flavors and firm texture.

One of the best dishes which I savored to the last bit was the Australian rack of Lamb (Rs.1295) , finely grilled in mix of savory and sweet red wine sauce in miso glaze on a bed of grilled veggies like broccoli, zucchini and mushrooms. Thoroughly loved it……. 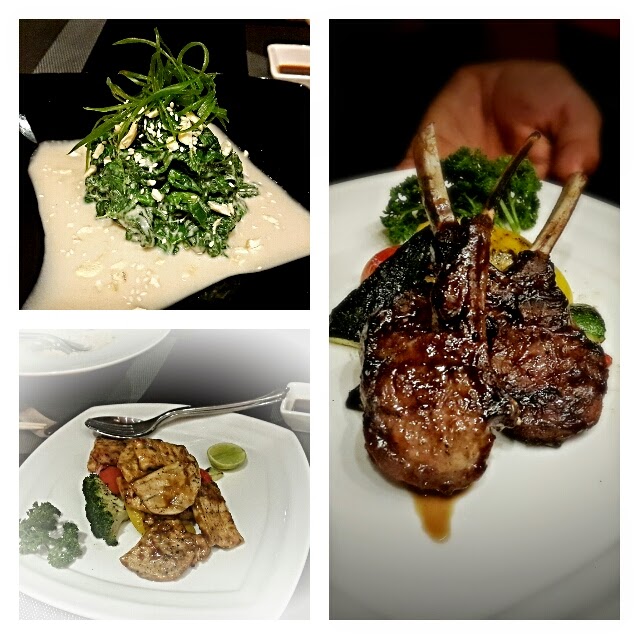 The most exotic thing to be served was the Sashimi platter – 12 pcs (Rs.1675)….It had sashimi cuts of crab, octopus, tuna, scallops and prawns. Oh my God, it was so beautiful and had all the beautiful colors one could ever imagine. But to my dismay, as I am allergic to shell fish, could not try anything except the octopus. It was the freshest piece of sea food; one could ever have in a place like Gurgaon…..so far from the coast……….

The desserts which I had were awesome………I had the blueberry cheesecake (Rs.450) and the Chocolate brownie with ice cream and chocolate sauce (Rs.400). It was one of the best cheesecakes I had lately……..

All the ingredients were so fresh and delicate, that I can admit the KOA people are very carefully sourcing them. One has to be very careful in sourcing products especially sea food and exotic veggies…….As Japanese cuisine is all about freshness and meticulous presentation……..This cuisine runs on many cultural principles like the “Power of Five”.

The number five “5” is considered important in Japanese culture, and this extends to its food traditions as well. They form the basis of concepts that have been in place for centuries. I believe that following the guidelines of the “Power of Five” can do more for improving your health and cooking skills than following recipes or diets.
Food should be enjoyed with all five of the senses: taste and smell are obvious, but sight figures predominately in Japanese cuisine. In fact, it can be considered just as important as taste.
Touch is also important, not only for the texture of the food itself, which should be varied, but also for tableware, as it is customary to hold vessels and utensils in one’s hands.
Hearing, while being a bit more esoteric, also figures into the experience. However, to properly appreciate the experience and give due respect to the chef, a quiet atmosphere is appreciated, so that you really appreciate the marvelous experience.
The Fifth Taste - Salty, sweet, sour, bitter, and… umami. Recently, much fuss has been made over umami, touted as the fifth taste. It can be accomplished by adding a little butter to a soy sauce based dish, or sprinkling a little parmesan cheese into a miso sauce. Umami is imparted by amino acids called glutamates.
Five Ways - The preparation of the dishes is also important, and here, there are also five methods: raw, simmered, fried, steamed and roasted or grilled.

However, the restaurateurs unanimously agree that Japanese cuisine will not be able to attain the same level of popularity in India in the near future as its Chinese or even Italian counterparts, due to its ingredients. Japanese food has the majority of ingredients flown in from Japan, so the food is bound to be expensive. Food joints selling sushi won't be cropping up in nooks and crannies in the foreseeable future……….Which gives an edge to the fine dine places for many more years to come…………Like Kitchens of Asia - KOA and other restaurants serving Japanese cuisine………

I will admit that YES, the food we had at KOA was very much in tune with the thoughts and cultural principles we have read so far. All my senses were working to their best while enjoying such a beautiful symphony of food.

Overall, a very nice and chic place to take your date or even your friends/family along for an up market experience with loads of healthy and fashionable dishes……..This place and it’s food is surely bound to fly your senses to the seventh sky or heaven I am sure………..


1 being the lowest and 5 the highest