Rivaayat-E-Rampur ----- Revival of Culture and Cuisine


The Oberoi Group conducted Rivaayat - the Indian culinary conclave (Revival), which saw experts from across the industry come together for an interactive training session held at The Oberoi, Gurgaon.
Eminent food celebrities such as Mr.Vir Sanghvi,  Ms.Marryam Reshii and Dr.Pushpesh Pant were guest speakers at the event. The culinary experts shared rare recipes and ancient cooking techniques from their respective cuisine specialities. 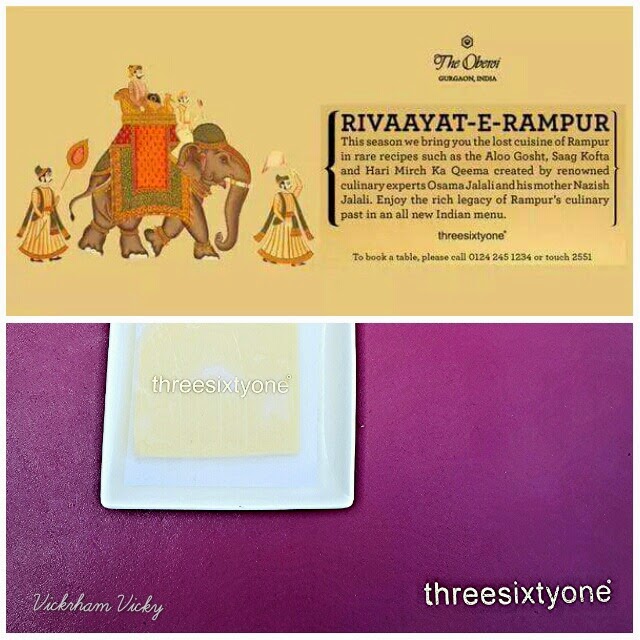 Rampur can be best explained with taste. Even though the city is forgotten in this fast world, but the recipes stand alive with their unique characteristics of aromas and taste. The distinct taste is brought in by the use of special herbs and spices in the exact proportions and cooking the dishes on low fire in special traditional utensils, as told to us by Nazish ji. She has always been a part of this rich culture and cuisine, as she belongs to Rampur. She has experienced many lavish meals being cooked in front of her eyes and even with her own hands.

Rampuri cuisine is essentially a “courtly cuisine” which evolved with its rulers and their tastes.  It is influenced by Afghans, Rajputs, Awadhs and Mughals.

We were privileged to have been invited to “The Oberoi, Gurgaon” by Mr. Osama Jalali himself, who is a well known journalist and also a food enthusiast. He has reviewed more than 2000 restaurants. His mother Nazish Jalali jee explained why it was such a tough thing for her to share her recipes with other people. It was Osama Bhai who convinced her by saying “ilm baantne se badhta hai” which means “knowledge and talent increases on sharing”   now through this initiative, the Rampuri cuisine will reach all over India…..


It was a lovely setting at the “Threesixtyone”, The Oberoi, Gurgaon….. We sat in their Al fresco waterside deck. It felt as if  we are on the path of Nirvana, the beautiful blue waters and the refreshing greens on one of the walls. Beauty at its best…….

We started our meal with the Dahi Phulki, which is a kind of Bhalla or we can say Dahi Vada which was good start then came the Seekh Kebab,  Kachche keeme ki Tikiya and  Kathal ki Shaami. …A wonderfully refreshing drink was served with it, Mufarrah which transalates into soothing, refreshing which it was…….
All the appetisers were different and subtly flavoured with full flavour of meat when compared to typical north Indian preparations which are spicier and hot (chilly). The Kathal (jackfruit) ki Shaami was awesome and had the texture of a mutton/chicken which is really surprising. The kachche keeme ki tikiya was beautifully prepared with lovely flavour of meat and no other overpowering flavours at all.

The main course consisted of Aloo Gosht , Khichda , Murg Korma, Urad Daal ( safed), Karele ki Chidiya , Laute Palaute . I was so mesmerized by the taste of murg korma and khichda and Aloo Gosht that I felt as if I am in heaven. Eating somewhat similar food since childhood, still never tasted such recipes which are so similar to those yet so different and unique.  The chicken korma had such lovely and different flavours that I can always substitute it for any lamb dish, whereas I am a big fan of mutton. Khichda , as they call it in Rampur , is kind of  Haleem but is more flavourful and texturous. It has about 7 kinds of grains cooked separately and then mixed with lamb meat and processed. Aloo gosht is a regular dish which is made most of the times and is so delicious, can be had any day and every day. Not a big fan of vegetarian fare , I still tried the Karele ki Chidiya, karelas stuffed with tangy mix of many things like fenugreek seeds, fennel etc. The laute palaute (cooked, wrapped and cooked again) is a besan pancake (gram flour) cut into lasagne type pasta and cooked in spicy gravy full of herbs and spices. 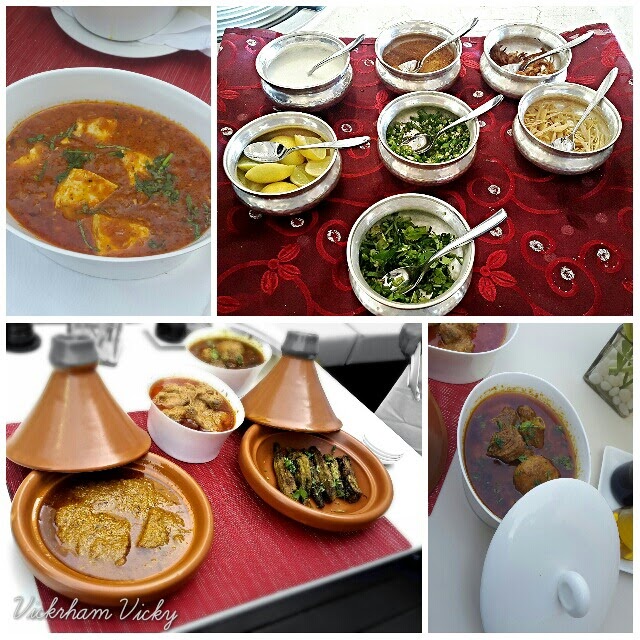 But wait, one of highlights of the meal was still to be unveiled. The Taar Korma, which is a Wedding reception (Walima) dish. Taar (layer of oil) floating atop this mutton dish is full of flavours and is even drunk in small bowls and also used for dipping hot breads.We were lucky to be served the Taar Korma, by our very own, Bhai Osama Jalali with his own hands, Loved it thoroughly.......


True to expectations, we did not have any room left for dessert, but when Gulathi, Aloo ka Zarda and Shahi Zarda were brought to the table. We could not resist at all. This was the best dessert, I have had till date, yes the Gulathi, it is a Phirni texture dish with pure ghee, kaju paste, mawa, rice and other nuts, truly royale in every sense.


Only a few things and moments in life can only be felt and experienced. It is really tough to put them down in words. I have tried my best to do so but still my regard for Osama Bhai and Ammi Jaan ( Nazish Jalali Jee) is falling short of superlatives………