Black Burger – Coverage by THE HUFFINGTON POST in association with THE TOI. 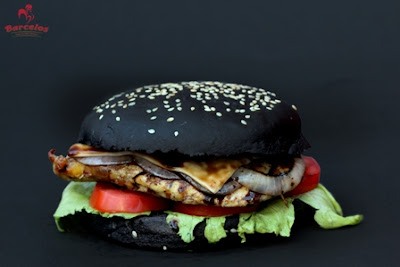 "You can have it in any colour — so long as it's black," said Henry Ford, founder of the Ford Motor Company, about the Model T.

South African food chain, Barcelos (set up its 1st outlet in Khan Market, New Delhi) has introduced the black burger as part of its menu. Now, burger chains in India may follow suit as SA-based fast-food chain Barcelos did this month and launched black burgers in the capital.
This is a good change by breaking the monotony from the regular brown burger. The Black Bun with white sesame seeds is awesome, soft melt in the mouth with nice and earthy flavors, the marinated chicken breast inside is succulent with grilled aubergine (eggplant) slices to make it creamier. I loved it thoroughly……The vegetarian counterpart is also available.
We all know about Delhi food culture, and its foodies. Most of them have an experimental palate. They like to experiment with different foods and variations.
Rohit Malhotra, GM operations of Barcelos India in an interview with Economic Times revealed that the restaurant has used yellow, blue and red food colouring to create its own variant. "Someone had to introduce it here and we did it," he says. ““It is very beautiful to look at and during our introductory tasting session, people loved it. Till now, they had only seen it on the net."
While the burger's unique hue and colour has caused much initial excitement, they were not sure if it will generate this sort of reaction.

I have seen long queue stretching up at their Khan Market outlet for the much coveted Black Burger. And people, who have tried it with the other offerings on the menu, liked it a lot. And to highlight it, this is one of the most healthy options available I town. As the meats and veggies used in the burgers are just grilled and not fried. Even the peri peri chicken and other stuff sold are grilled.

One can't help but wonder if this is just another extreme trend that will black out soon. All we can say is, Bun appetit to those who're going to try it.