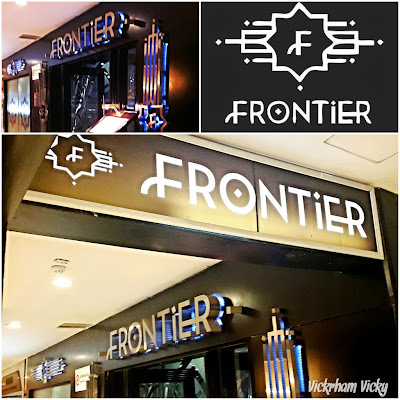 The Ashok symbolizes and celebrates the traditional grandeur of the historic capital of India. The Ashok is the foremost of the 5 star hotels and the flagship hotel of the “Ashok Group” set in a prime location in Delhi’s Diplomatic Enclave.It has an inventory of 550 rooms, 389 of them are well appointed premium rooms, 150 luxuriously appointed ‘Suites’ , 10 Deluxe Suites and 1 Presidential Suite each depicting the vibrant ethos of India.

The Hotel boasts of a wide variety of cuisines at its different restaurants and dining options. One can discover a world of exquisite dining; a repertoire of Indian as well as International cuisines. One of my favorite since my childhood days, being “ Frontier”.  I still remember my college days, when we used to save money specially to dine at this place. It’s been an Icon of fine dining and NWFP (North West Frontier Province)* cuisine. I don’t understand why people have a build up a perception for Hotels like The Ashok etc. that they cannot be as good as the other 5 star properties. After my meal at the Frontier, I can bet on it that the standards have been maintained very well and uniformity of taste in the cuisine can be relished clearly. It’s my word, for all the foodies that if you have not eaten at this place, you are definitely missing something big.

From the North West Frontier Province comes the famed Peshawari cuisine, one of the legacies of undivided India. This delectable cuisine can be best defined as rustic and robust. This cuisine uses the simplistic style of preparation, where big chunks of meat, seafood and vegetables are marinated sparingly and cooked in the clay tandoor at high temperatures so that they remain soft, tender and succulent. The spices and flavours are used in moderation so as not to overpower the preparations and to be acceptable to every palate. The rustic nature of this cuisine and the focus on preserving the flavours and ingredients is another unique aspect of this cuisine. 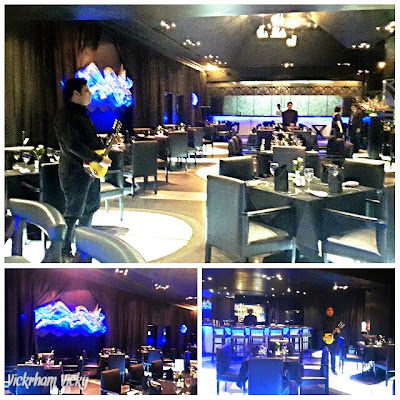 When I entered the restaurant, I was taken aback by its grandeur and new look. It used to be very rustic and a reflection of the cuisine it offered till few years back. Now, after so many years it has been renovated into a modern looking and chic place. It’s important to evolve with time, which can be clearly seen here.  A 76 cover restaurant with a live show kitchen, it’s spacious too. The interiors depict a flowing river (probably Jhelum) at night when the stars are tinkling in the sky. The live medallion played by a very talented musician just transports you to another world and makes the whole experience worthwhile.

The food, of course we are here for food. The nostalgic effect was so strong, that I was overwhelmed with the whole experience of eating here.

We started with the kebabs – the Patthar Kebab (beaten lamb, marinated mildly and cooked over hot stones/plates) AWESOME – (5.0 / 5.0), the Kebab-e-Bannu (succulent tikkas of chicken enclosed in egg wrapping done in tandoor) Lovely – (4.5 / 5.0) and the Fish Tikka (marinated chunks of king fish done in tandoor) , good (4.0 / 5.0) 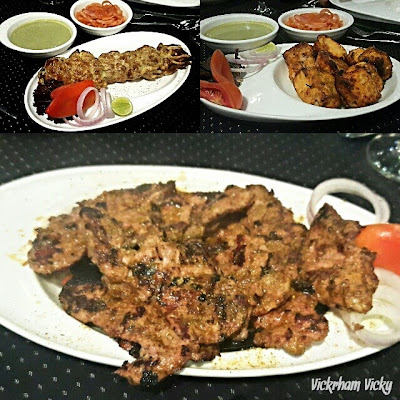 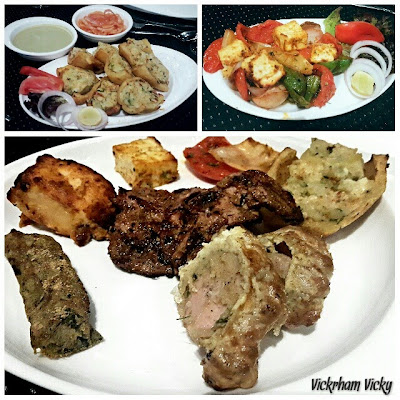 Vegetarian kebabs like Bharwan Aaloo (stuffed potato, with cheese, done in tandoor) was good (4.0/5.0), the Moti e Zameen (marinated veggies like onions, tomatoes, capsicum and cottage cheese chunks done in tandoor) nicely done, no gaga about it. (4.0/5.0) The Subz e seekh was just normal, as it can be (3.5 /5.0)

I was recommended to have a drink called Kala Noor, which was really too good. It was an amalgamation of jaljeera, spices and sprite – thoroughly refreshing and appetizing. I also tried the Pink Panther – a guava flavored drink, nice and creamy texture. I also ordered the Melon Cocktail and it was well mixed.

While the preparation seems simplistic; the standardization of recipes, quality of ingredients used, marination time, temperature of tandoor, type of tandoor and the standards set, have to be followed religiously, which I can say are being done religiously at “The Frontier” because I could relish the same taste even today after so many years. The recipes are being followed very well by the talented Chef, Anish Kanswal and he has maintained the pride and honour of this iconic place, nicely and graciously. 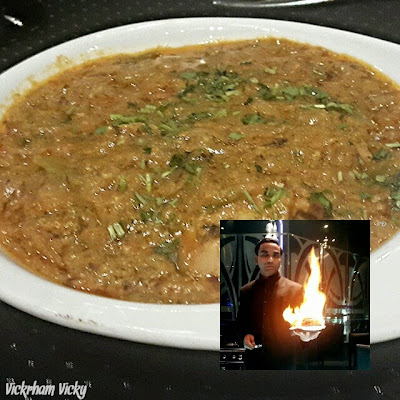 The Chef served us the main course, comprising of Raan Aalishan (tender leg of lamb marinated in rum and rare spices, done in tandoor) was to die for. The most flavorful, the most succulent, and the melt in the mouth lamb meat – I was on the seventh sky, with my first bite of this raan. I can visit “The Frontier” only for this dish all my life. (5.0 /5.0)

Other dishes were the Khatte Baingan (eggplant cooked in different spices in gravy) – (3.5 /5.0), Paneer Peshawari (cubes of cottage cheese in thick tomato based gravy) really very nice, (4.0/5.0) The Palak Mushroom was also very differently done, not the regular flavor at all, (4.0 / 5.0)……. One of the best, the Dal Dera Ismail Khan is a harmony of whole black lentils, tomatoes, ginger and garlic, simmered overnight on coal embers and finished with cream and butter, (5.0 / 5.0)

Awesome flavors of slow cooking on the tandoor, overnight could be felt in the mouth. The utilisation of spices is very limited. kasoori methi, Kashmiri mirchi which enhance the smoky flavour of food cooked in tandoor are used. Garam masala adds to taste and flavour which is used sparingly but enhances taste of pulaos and kebabs.

The breads such as pudina naan, keema naan and the garlic naan are a perfect accompliment to the whole meal. They go very well with the gravies, meat and yes of course, the Dal.

Any meal, whether it’s Italian, French or a Peshawari, cannot be complete without a sweet ending simply put up as, Dessert. We had the luscious Phirni (4.5 / 5.0) served traditionally in clay bowls – nice and creamy, the Ras Malai (Bengali Sweet made with milk) (3.5/5.0)and the evergreen Gulab Jamun. (3.5/5.0) 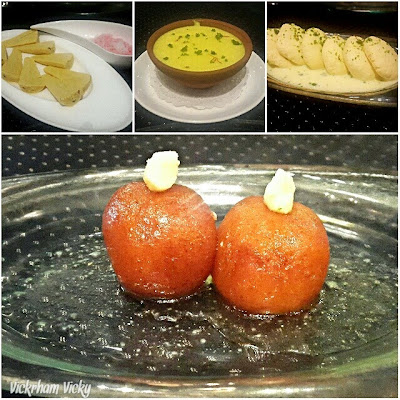 I must admit, the service was very prompt and the staff was really courteous and hospitable. They had complete knowledge of the dishes being served as we asked them few queries we had about the food.

North West Frontier cuisine has been popular because most of the kebabs owe their origin to this cuisine. This cuisine is very popular because of its unique style of cooking in terms of methods and ingredients. The flavour that the tandoor imparts cannot be matched or duplicated. The other important factor is that the method of cooking is quite adaptable to vegetarian ingredients also. Tandoori gobhi or Aloo are as popular as chicken and mutton tikkas.

Currently “Frontier” is also running a promotion called “Tandoori Nights” wherein you get to savour select kebabs with a complimentary cocktail for Rs.599/- All Inclusive…….Such festivals and promotions are really important to attract the young as well as the fresh crowd who can come and try the best on offer and get to know the quality and standard of the restaurant…. 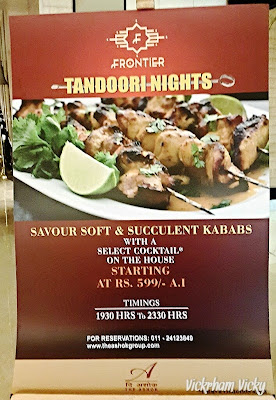 Reviewed and Written by: Vickrham (Vicky)


For: TWCI – The Writers Collective of India