Burger King launches RED BURGER in JAPAN - Next is what ??? 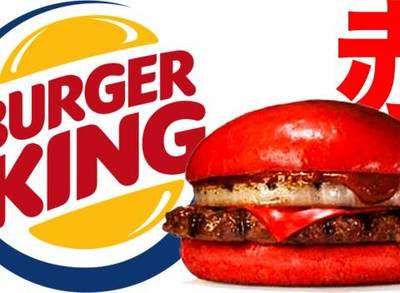 Is Burger King Japan turning to a child’s art book or the shades catalog (paints) for burger inspiration? Not only are the chain's all-black-everything Kuro burgers (that's black buns with black cheese) set to make a return this summer, the restaurant will sling all-red burgers starting July 3. Called Aka Samurai gets it’s aka (Japanese for "red'). The customers can pick between Aka Samurai Chicken and Aka Samurai Beef .It’s the meat patty between the red buns topped with red cheese and seasoned with a red hot sauce made from miso and hot pepper marked as “angry”.

Burger King is no stranger to offbeat looking sandwiches. Last year, it launched a black burger with a black bun. This year they are coming up with it again.This year's version will come with fried eggplant in addition to the black buns, cheese and sauce. 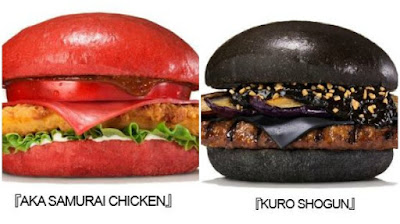 The colored burgers are part of Burger King's quest to dominate Japan, as a number of fast-food chains – including Taco Bell and Carl's Jr. – have flocked to the land of sushi and sashimi. No surprise there, as analysts predict Asia is the next big market for fast-food chains, due to shifting consumer trends.

We , Indians are getting luckier by the day as most of the new launches come to us apparently at the same time they happen anywhere in the world. BTW, BARCELOS, India is coming up with its version of Red Burger this month end, as informed to you earlier. Will keep you all posted about its launch and thereafater………………