The Oberoi, New Delhi is an iconic hotel in honor of its place in the history of the city and in the memory of all who have experienced its unparalleled hospitality. The hotel enjoys a deep emotional connect with locals and visitors alike and has witnessed many generations of families sharing cherished moments decade after decade.

It opened its doors in the year 1965 and has enjoyed unwavering patronage ever since. Recognized as a pioneer in luxury hospitality, this ICON of New Delhi has played host to the world’s elite – from presidents to premiers; CEO’s to celebrities and continues to do so.

"Taipan" in Chinese stands for Supreme Leader in a company or an army, a fleet or a nation or A powerful businessman in China.......

A large portrait of a Chinese warrior made of rice paper, at the entrance of this iconic restaurant welcomes us. It’s located on the rooftop facing the Delhi Golf Club and the Lutyens Delhi which gives an all round view of our green Delhi. Taipan has been in existence since last 30 years and is considered to be a benchmark in Chinese cuisine. The Interiors are soothing and have an old world charm attached to them The Mahogany wood furniture creates an ambiance par excellence. 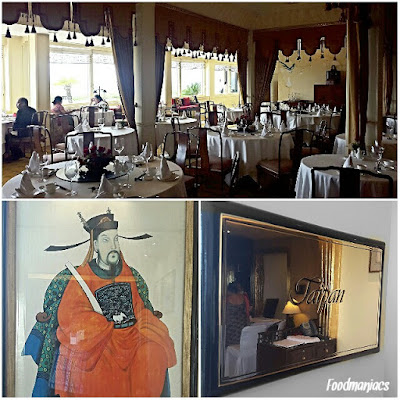 A new resident Chef has been called from China, named Chef Jia Yi Hu. Chef Hu has had a very diverse career spanning over a decade in top restaurants in Beijing. Popularly known as the Dimsum King, Chef Hu, is a master at innovation and can make over 300 varieties of dimsums. Always keen to extend his repertoire, the chef is also a skilled master of hand pulled noodles! He has even won a Gold Medal in a Dimsum competition in China organized by China Hotel Association in 2008.

We had a chance to savour his lovely delights the other day in the form of Dimsum lunch at the most iconic, Taipan.  Chef personally came to meet and greet us, though language is an issue but his gestures and actions showed how passionate and excited he was to serve us.

We started with the nibbles, the rice crunchies. The first Dimsums to be served were the  spiced mushroom and coriander dumpling, Spinach, water chestnut  and black bean dumpling, Spiced fish  and tofu dumpling , Pan fried chicken and chive dumpling, Turnip and glass noodle dumpling  to name a few. The different colors and shapes of Dimsums were really a visual treat for the eyes. Being a hard core non vegetarian, I was a little skeptical but to my surprise I loved the vegetarian Dimsums too. The other Dimsums served were not steamed but fried like the chicken puff and the bar-be-cued pork puff. One of the highlights was the Duck Roll, a beautifully done crispy Peking duck rolled in rice paper with other crispy veggies. The Cantonese style of cooking was very much evident in what was served to us till now, as the flavors were very subtle.


I must admit everything was outstanding and the taste was nowhere near to what I have ever tasted till now, very light and subtle on the palate. Chef Hu is a master in his art. He also served us his signature Dan Dan Noodle Soup which was awesome and spicy. The contrast in flavors of the Dimsums and the soup was phenomenal. As they were too subtle and bland with light flavors of chilly and pepper whereas the soup was full of flavors and bursted with chilly and other ingredients like crushed peanuts etc showcasing the Schezwan style of cooking. The hand pulled noodles were so rustic and well made, that it was really a delightful experience altogether.

To sweeten up our palate, we were served the Chilled mango Pudding with Baked Mango Puff. A very different dessert than we usually have, it was custardy with lovely aroma of mango and mildly sweet. The other dessert served was the Raspberry Sorbet in hand folded waffle cones, too refreshing as if we were having fresh raspberries.  Last but not the least Hong Kong Style Egg Tart, which was tart shells filled with sweetened egg filling…

Taipan with its amazing views of the city is a must try place for anyone who loves Chinese food…..Wishing many more quality years to, TAIPAN.....