Garam Dharam - Fun, Food and Films under one roof

A first-of-its-kind outlet in Delhi's Connaught Place area, it takes inspiration from the movies, dialogues and songs of the 'He-Man' of Bollywood. The entrance, adorned by posters of the actor's films, itself gives a hint of what's in store.
Bollywood Supertstar, Dharmendra is everybody’s favorite and has been ruling the hearts of millions of his fans from his younger days. His movies, dialogues, songs are legendary and people relate to them still, very closely and easily. Keeping this in mind restaurateur Umang Tewari and Mickey Mehta, Partners, Garam Dharam Dhaba Te Theka thought of giving the city its first restaurant inspired by the  legendary actor.

How and why did you pan to enter into restaurant space?
I never thought of entering into restaurant business. I was very apprehensive before launching –Garam Dharam Dhaba Te Theka as I am an actor and I don’t know any other thing other than acting as I am unaware about the art of doing business but Mickey and Umang and their love for me made me enter into this business.
"Everyone loves me so I am sure people will love this place too that has my vibes everywhere," he added, while seated in the midst of the over 4,000 sq ft space, which has been enlivened with 'filmy' elements involving Dharmendra.


Why did you choose to give it a ‘Dhaba’ look?
Asked if he enjoys a 'Dhaba' or at a restaurant, he said he loves using his hands to eat.
"I'm quite shy with all the dining etiquettes. I don't know how people enjoy with a fork and a knife. Till the time I can't use my hand, I can't enjoy food. I love slurping my fingers," he said.


Why the name “Garam Dharam”?
We wanted to give it a name for which people have known me for ages and showered their love on me.  Hence, Garam Dharam was named to give recognition and recall my Bollywood stature. On this, Mickey conceptualised the Dhaba look for the restaurant, while Umang came up with an innovative idea of clubbing  it with a ‘Theka’ or Bar to suffice the purpose.

What is your favourite dish?
My favorite dish is Biryani, and anything cooked nicely and with love whether it’s just a Dal.

What is your contribution in opening this restaurant?
I have asked them not to compromise on the quality of food being served.  I have given inputs on interiors, the menu, and the food. 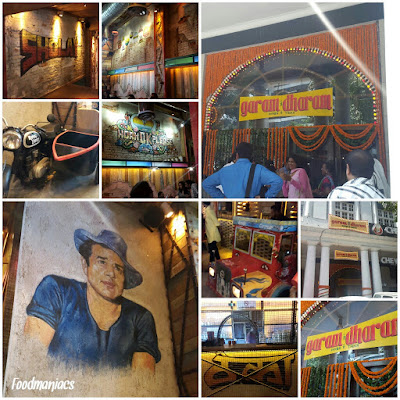 We, the TWCI – The Writers Collective of India were invited for the Press Conference and the First Preview of the place. As you enter the place you get a feel of an open environment as you will find at a Dhaba. The walls are rustic, the roofs has lights done in upturned buckets. The décor is that of a highway style Dhaba with DJ console made up in a truck Chassis and the walls full of dialogues from Dharam Ji’s movies and names of his movies and filmstars painted on the walls. The place also features the classic bike from the movie "Sholay", which saw Dharmendra and his co-star, Amitabh Bachchan sing the memorable "Yeh Dosti" song in Jai Veeru style. Even the upholstery on the furniture is printed with images from Dharam ji’s movies.  The place has some more quirky points that will definitely make anyone fall in love with it. The entrance has a bio scope in the podium form with posters of Dharmendra’s popular movies and famous dialogues.

A country liquor style “Theka” is done up in the outlet where drinks are named and served in “Desi” style. A unique concept of Dhaba Dabbas are being launched , which bare going to be a hit among people looking for a quick meals, as told by Mr. Umang Tewari.

Overall, a unique themed eating place, a Dhaba but in the heart of New Delhi, posh area of CP and not on the highway or the by lanes of any old city. The pricing is also very competitive and reasonable, meal for two will be approx. Rs.1000 , as told by Mr. Mickey Mehta.