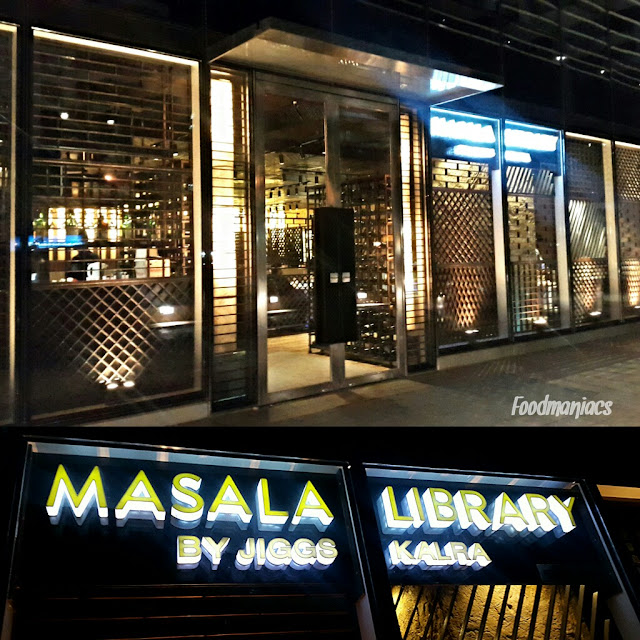 One has to have great expectations while visiting any of the places which has the name of Jiggs Kalra suffixed to it. The Czar of Indian cuisine, the Tastemaker of the nation – Sir Jiggs Kalra aims at showcasing the ultimate epicurean lineage of the ancient Indian cuisines. The culinary offering at Masala Library by Jiggs Kalra, endeavour's to offer its patrons a never-before-undertaken gastronomic voyage, capturing the grandeur of centuries-old traditions and the long-lost essence of one of the oldest known gastronomic traditions in the World, combining it with modern day cooking techniques, whilst retaining the traditional preparation for each dish on offer. It aims at recreating the erstwhile culinary traditions in turn offering a truly gastronomical adventure for the connoisseurs.

This was my first visit to this restaurant and I was booked for the 7.30 pm seating. But as we all know, Mumbai traffic can take you or break you anywhere/ anytime. I was lucky enough to call them up and fix up my seating for the next session which starts at 10 pm. Yes they have two seating slots; one at 7.30 pm and other at 10 pm. 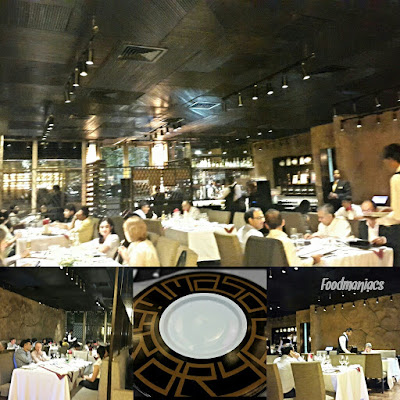 The interiors are modern but simple. The rugged look on the walls and the bamboo roofs with wooden shades and earthy hues makes the place look chic and classy. We were seated well by the Manager, Mr. Sujoy and his courteous staff. Chef Dhwani herself comes and meets you and confirms and discusses about the food and menu offerings. We decided to have one Non veg and the other Veg course for the night.  This “Progressive Indian Fare” is a hybrid cuisine which fuses traditional recipes with modern culinary techniques (molecular gastronomy). 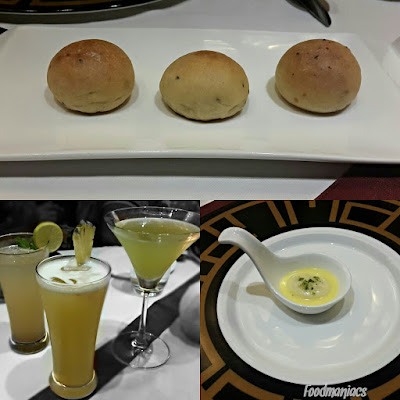 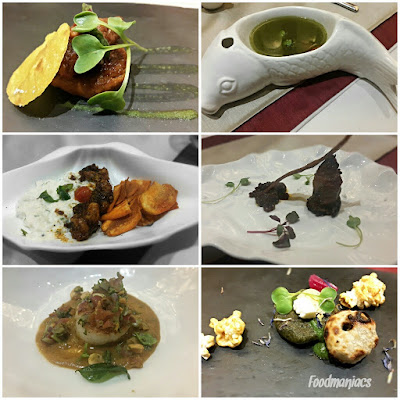 The first molecular creation to be served was the Amouse Bouche, that’s a thandai sphere which bursts in the mouth to cleanse it fully and the maska buns were just melt in the mouth. The Soups are also served in a pour over manner on the table, which as per me is a dampner coz it makes the soup cold. I was served the Patrani Machchi in a fish shaped bowl poured  over with a lemon coriander shorba at the table itself with tid bits of edamame beans on the side and the Veg version was the Tomato shorba with basil matthri and chaat. The soup was aromatic and the fish was a perfect complement to it , even the veg version was just fine.

We also tried some of their cocktails like the signature Burnt curry leaf Martini, which was distinct from the normal fare and real good. In the meantime, the other course was served which had the Tandoori Guchhi with lotus stem crisps and parmesan dust for the veg ones and the Bacon wrapped Guchhi  (Morels) with Chardonnay Carbonara sauce and the Curry leaf and Pepper Prawns with Thaiyar Sadam (curd rice) .The strong spiciness of the prawns is balanced with the curd. The freshness of the curd rice and the surprise element to the dish is the topping of Banana crisps ( kerala style) which adds an interesting crunchiness to the dish.
I loved my bacony delight though (Morel dish) which had all the smoky and earthy flavors packed into one, really too good.

Our palates freshly cleansed by frozen Mishti Doi Lollipops, we were ready for the main course.
The best was yet to arrive and then the Lamb Chops (braised) with kokum glaze and maple appeared in front of me. This dish is a killer, fall of the bone meat which melts in the mouth with awesome flavors of spices and tanginess of kokum. I could have ordered once more but other dishes had to be eaten too, so I avoided. 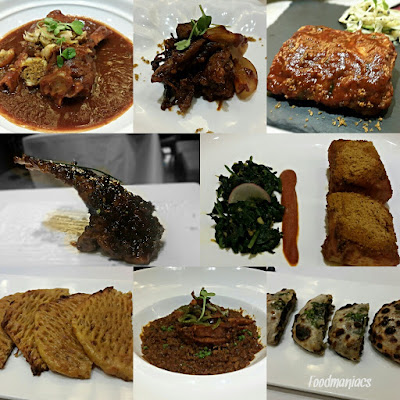 The most memorable component of the main course was the assortment of inventive and beautifully flaky stuffed Indian breads in small miniature size portions cut into halves. We were also served with the  Laal maas,this typical Rajasthani dish had the consistency of a mutton nihari and the meat was once again fall-off-the-bone kind but unlike a typical laal maas, was quite mild in its flavours. I loved this dish too.  I somehow did’nt relish a dish which was made with soya keema, it was too out of the place for me.The sarson ki gilawat served with pop corn and dollop of cream denoting the sarson ka saag and makki ki roti (deconstructed and farzified) was very nicely conceptualized. 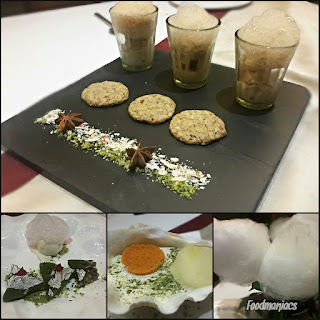 The Desserts served here, have always been a talk of town. The Jalebi Caviar as the name suggests  presents Jalebi in the form of caviar (small eggs) that pop and melt in the mouth and are served with a saffron glaze and in a shell shaped bowl of pistaschio rabri, this was the perfect end to our meal. The Chai Ice Cream is yet another innovation, a unique dessert combination served at this restaurant. Made with homemade chai ice cream, topped with cutting chai foam and served with masala cinnamon cookies, totally awesome.

Paan flavored Cotton candy came last and it was a nice way to complete a meal and freshen our mouths.

Overall, a great place to be and experience an all new take on the Indian cuisine. I am proud of this concept, which has helped Indian cuisine to expose itself and make a mark in the international culinary arena.