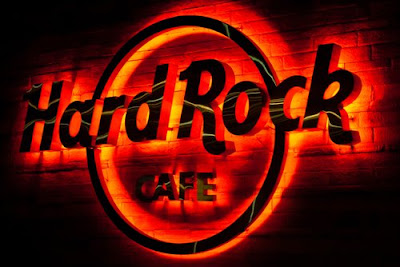 Hard Rock Café is known for its unusual yet uber cool style. While everyone is going gala over Oktober fests, Hard Rock Café has added a twist even to this. Hard Rock Café presents its ROCKTOBER FEST!! With a rich and exquisite selection of German beers to enjoy with Rock n Roll music, Hard Rock Café has checked every arrangement to make you party real hard !!
Kick start your evening with the JAGERBOMB SHOT, a concoction of Jagermeister and our favourite Red Bull – just drink one and keep it coming ! A refreshing drink that made my evening was the Apple Vodka Shandy which was a perfect blend of vodka, green apple syrup, green apple chunks and beer, mild in taste it was good complement to the food.


We started our evening with Carnival Fiesta Fries, tangy chilli garlic crusted fries topped with pulled chicken, chicken frank slices, dusted with Cajun spice and served with cheddar cheese sauce and traditional salsa – truly addictive. Once you dig in these fries you will forget even talking to anyone. You can never have enough of these juicy loaded fries.

Next in line was a range of hot dogs or submarines. Char grilled chicken frank topped with Jamaican spiced stir fried mushrooms came together in the Jamaican Hotty Submarine, although packed with flavor this particular submarine did not turn out to be my favourite…..you will be surprised to hear which one topped my list….just wait !!


Next we were served an Italian Submarine, subroll with tangy arabiatta mayo, smoked chicken frank topped with spiced onions, peppers served with loadsss of fries. This was a bang on submarine to binge on. A hearty submarine oozing with rich flavours.


And now for the star of the night, a submarine that was without a doubt the best one- Mexican Mafia Submarine- a vegetarian classic that simply over shadowed the non vegetarian spread. Chickne frank replaced with crispy veggie fingers topped with cocktail mayo, Mexican beans and melted cheese…….enough said !! This submarine proved that we should not underestimate the vegetarian delicacies on the menu. Hats off to the chef, he totally took us by surprise with this one !

So gear up to Rock you October at the Hard Rock Café, the festival is on till the 8th of November,2015 at Hard Rock Café, Saket !!!! From beers to music and from food to fell, Hard Rock Café has it all in store for you, do not miss it for the world!!

Coverage and Compiled By : Ritika Dhawan for Foodmaniacs
Email : vickrham.m@gmail.com