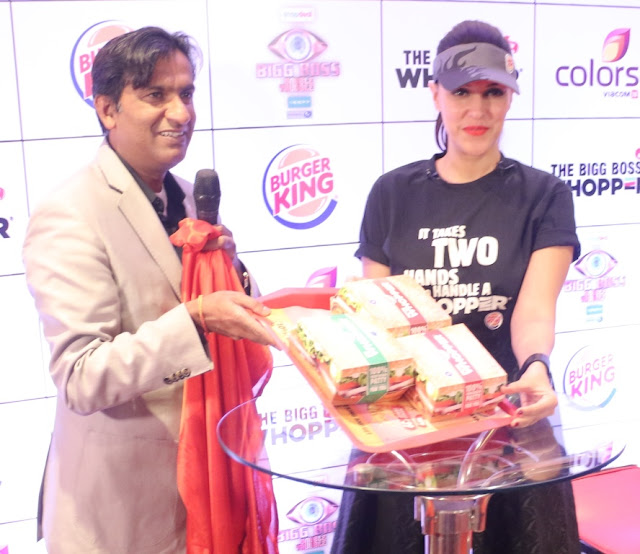 BURGER KING® in association with leading Hindi General Entertainment Channel, COLORS, launches a limited edition Whopper (R) to commemorate the successful completion of its first year of operations in India. The BIGG BOSS WHOPPER, named after the hugely popular BIGG BOSS DOUBLE TROUBLE, promises to double up the experience for all Whopper (R) lovers.  The limited edition BIGG BOSS WHOPPER was recently unveiled in Mumbai.

Speaking on the anniversary, Mr Rajeev Varman CEO BURGER KING India commented “We are absolutely overwhelmed by the response we’ve received in India.  We are delighted to see the growth our brand has achieved in just one year of operations here and look forward to continued success here. India is a strategic market for us and is well poised to be one of our largest markets globally” On the launch of The Whopper ®, he added “We have sold more than 2 million Whoppers (R) in India and The BIGG BOSS WHOPPER ® is a perfect treat for all the Whopper lovers out there. With Its juicy, saucy, fiery and crunchy favour, The BIGG BOSS WHOPPER doubles up in taste, size and experience” On the association with COLORS, Mr Varman added “We wanted to add some more excitement to the Whopper and BIGG BOSS NAU was the perfect choice. Just like the show, The BIGG BOSS WHOPPER is BIG and DOUBLES up in taste and experience with its juicy, saucy, fiery and crunchy flavour. We are confident that the association will bring us closer to our consumers and build-in a stronger brand recall”

The BIGG BOSS WHOPPER will be available in three variants – Veg, Chicken and Mutton at all the BURGER KING outlets in India till January 2016.

Commenting on the association, Raj Nayak, CEO – COLORS said, “Food and entertainment are two elements which always go hand-in-hand. Bigg Boss has always presented parivarik entertainment avenues to viewers, much like how Burger King is about creating a family experience with its delectable menu options. As Double Troubles brews in the Bigg Boss house this year, the fieriness of the contestants and their journey has been perfectly captured in the limited edition BIGG BOSS Whopper. Having said that, we would like to congratulate Burger King on completing the one-year milestone in India, and look forward to building a strong relationship with the brand.”

BURGER KING® opened its first outlet in India on 9th November 2014 at Select City-walk mall in Delhi; now operates 32 restaurants across Mumbai, Delhi NCR, Pune, Bengaluru, Chandigarh, Punjab and Hyderabad and is all set to launch its first outlet in Chennai this month. 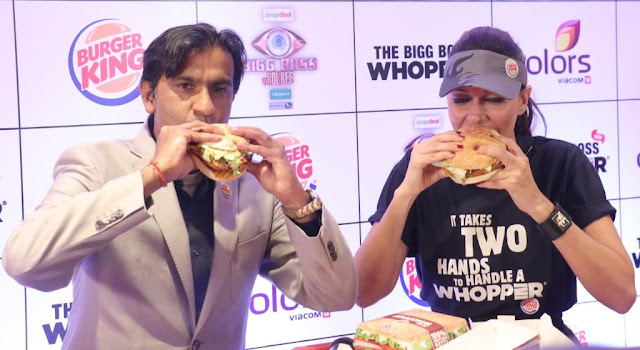 Prior to the launch in India, BURGER KING conducted an extensive research across cities to understand the taste preferences of consumers in India. The product development process was started from scratch, with the entire menu developed in India to suit the Indian taste palates. The India menu was tested through consumer research with 3000 consumers prior to the launch.  Apart from the flagship Whopper (R), which is available for Indian consumers in Veg, Chicken and Mutton variants, the brand also has on offer a very unique and tasty Chicken Tandoor Grill burger which is one of the bestselling product and a favourite across markets. In its endeavour to offer innovative and great tasting products to customers, the brand has recently introduced Hi-Fries in three variants – cheesy, Italian and Chicken and Chicken Keema Crunch burger.

BURGER KING® has also introduced a very easy upgrade to combo pricing that helps customers enhance their dining experience. You can upgrade any burger to a combo including fries and a fountain drink at just INR 50 across the menu.

The unique appeal for Burger King lies in the quality where the brand is conscious of its standards and uses 100 percent protein like chicken and mutton to form the patties and uses pulp of real fruit in its shakes. The quality is reflected clearly in the superior taste and helps the brand live up to its promise of 'Taste is King’.

In a constant endeavour to improve guest experience, BURGER KING has recently launched its delivery services in India. Capitalizing on online apps which are finding a huge appetite among urban customer, BURGER KING® has developed a single user-friendly tech enabled platform, to provide current and potential customers faster access to the much loved burgers at the click of a button. This speed of delivery has been centred around ensuring no compromise on product quality and is focused on enhancing overall customer experience.