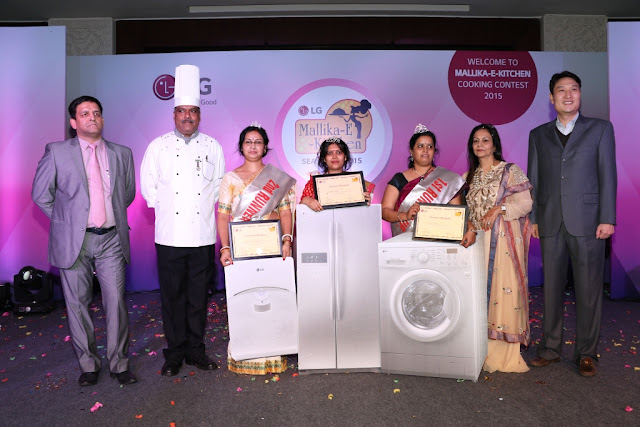 New Delhi, December,2015: LG Electronics India  crowned Ms Ruby Saha from Kolkata as the LG Mallika-E-Kitchen 2015 Cooking Queen. The grand finale, held on 23rd December in New Delhi, saw the twelve finalists vie for the crown. The country’s most popular on ground live cooking competition for amateur cooks attracted over 6000 participants – the highest so far – from around 100 cities across India in the competition’s seventh edition.

Primarily introduced for home cooks to showcase their exceptional culinary talent, this year’s LG Mallika-E-Kitchen 2015 winner was presented with LG Side by Side refrigerator for her delicious award winning recipe of Soloana Bengali Bhuri Bhoj. Ms Mansi Hinge from Nagpur and Ms Rajshree Chakroborty from Guwahati were the first and second runners up respectively. They were presented with LG Front loading washing machine and LG True Water Purifier for their lip-smacking, indulgent creations that tickled the taste buds of the judges.

Commenting on the occasion, Mr Rajeev Jain, Vice President, Home Appliance, LG Electronics India (P) Ltd, said, “It is amazing to see the talent that exists in India and with participation touching 6000 amateur chefs, the 2015 edition of LG’s Mallika-E-Kitchen cooking contest has been immensely successful. This competition has yet again proved that versatile as well as healthy cooking can be done using microwave oven. The numbers prove that consumers support and appreciate LG’s endeavor to promote healthy cooking talent in India. This contest gives us an opportunity to directly reach out to consumers and get feedback and suggestions for future innovations.” Considering the extremely low penetration of 1% for microwave oven, this is an excellent platform to reach out to the consumers.

Excited on winning the title, Ms Ruby Saha said, “I am thrilled to have won the prestigious title of LG Mallika-E-Kitchen 2015. I’ve always enjoyed experimenting with food and this contest gave me a national platform to showcase my talent, appreciating my passion for food. This award has given me an opportunity to take my culinary journey to the next level. I am grateful that LG has thought about us and given Indian women this amazing opportunity to prove how innovative they can be when they are really passionate about cooking healthy and tasty food for their loved ones.” 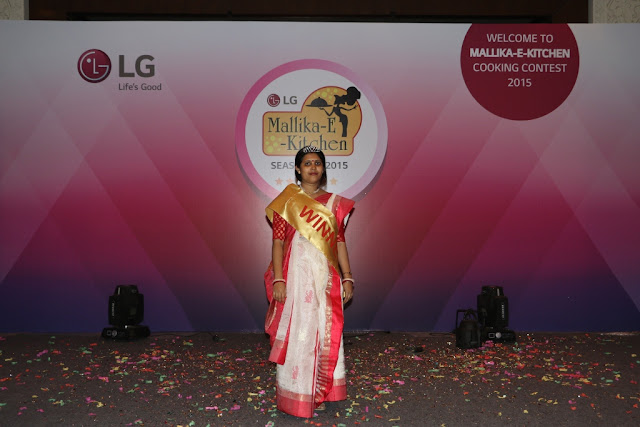 About Mallika-E-Kitchen Cooking Contest:
Any Indian woman above the age of 18 years who purchased a LG Microwave oven during the period between 15th October 2015 and 30th November 2015 was eligible to enter the LG Mallika-E-Kitchen Cooking Contest by simply filling a registration form. Apart from this, they could also invite one more female as a referral contestant from their friends and family. The form was available at LG Brand shops, authorized dealers etc and could also be filled online on the LG India website. The participants were contacted by LG representatives for the confirmation of the venue and date of the Local Level rounds. There were three rounds, the city round (local), the zonal round and the grand finale.
In round one of the contest day, the participants were required to bring ready-to-serve dishes cooked in a microwave oven, along with their microwave friendly recipes. The local round winning recipe was selected basis set of parameters by the panel of judges and the selected contestant was qualified for the Zonal Level round, along with a cashback up to Rs 10,000. Besides this, there was a direct wild card entry into the zonal round for the winner of Mallika-E-Kitchen social contest which was conducted on Facebook. 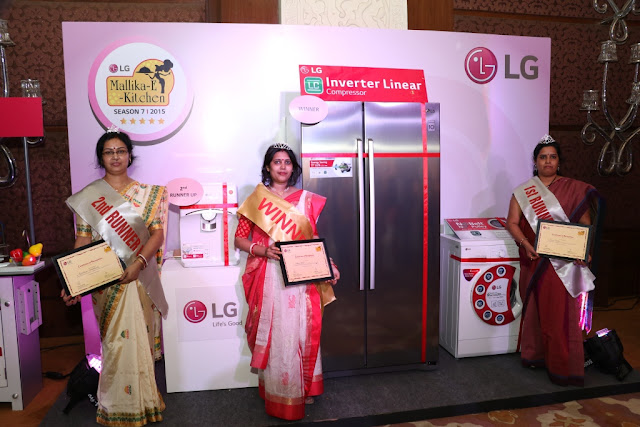 A total of three winners were selected from each Zonal Level round which was a live cooking round with cooking time of 90 minutes. Finally, the Zonal round winners competed at a national level contest to be selected as LG’s prestigious Mallika-E-Kitchen contest winner. Winners of Mallika-E-kitchen contest won grand prizes like LG Side by Side Refrigerator, Front Load Washing Machine and LG True Water Purifier worth Lacs of rupees.

About LG Electronics India Pvt. Ltd.
LG Electronics India Pvt. Ltd., a wholly owned subsidiary of LG Electronics, South Korea was established in January 1997 in India. It is one of the most formidable brands in consumer electronics, home appliances, IT hardware and mobile communications space. In India for a decade, LG has earned a premium brand positioning and is the acknowledged trendsetter for the industry. LGEIL's manufacturing unit at Greater Noida is one of the most eco-friendly units among all LG manufacturing plants in the world. The second Greenfield facility is located at Ranjangaon; Pune has the capacity to manufacture LED TV’s, air conditioners, washing machines, refrigerators, and monitors