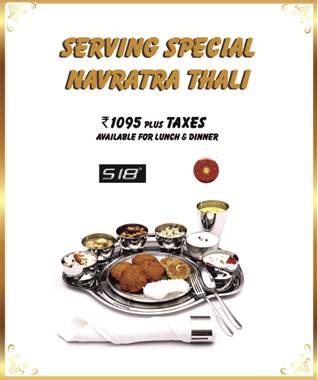 The festive season is beginning with the colorful festival of dance and music, Navratras, already underway. As no celebration is complete without indulging in mouth-watering food, the iconic hospitality destination of Delhi-NCR, Radisson Blu MBD Hotel Noida is offering a Special Navratra Thali featuring a wide array of gastronomical delights!

During Navratras, Goddess Durga is worshipped and many of us observe fasts throughout the 9-days, so to make your lunch and evening meals very special, this thali offers a complete platter with some traditional delicacies. The Navratra menu includes a scrumptious variety right from the starters and main course, to the dessert options. To begin with the snacks, you can choose from Shaboodana Mewe Ki Tikki made with Sago Pear and dry fruit gellate, Shakarkandi Ki Tikki which has sweet potato patties roasted in a clay oven, Paneer Makhane Ki Tikki made using cottage cheese and lotus seed gellate. For those who wish to be a little experimental, you can go for the Kache Kela Kebab, which are made with steamed raw bananas and raisins.

The highlight of the culinary feast is the hearty main course, which offers delicacies like Shingada Makhana Malai Curry made with chestnut and lotus seed in a silken cashew nut gravy, Phaldhari Kofta Curry which has fried raw banana dumplings in yoghurt cashew gravy, and a delectable combination of colocasia with yoghurt in the Arbi Dahi Ki Tarkari. You can also try the lip-smacking Paneer Ki Burji with the subtle taste of cumin and the Aloo Rasila made by slow cooking baby potatoes.

For those with a sweet tooth, don’t miss the special treats like Shaboodana Kheer, Makhane Ki Kheer, Fruit Rabadi and Kaddu Ka Halwa, which is made by cooking red pumpkin in Ghee and Sugar, and garnished with dry fruits. To top it all, each guest is offered the traditional beverage of saffron milk to complete your meal and give you a royal feel!

So, this Navratras head to Radisson Blu MBD Hotel Noida to revel in the spirit of the festival and celebrate by indulging in some of the most mouth-watering and scrumptious dishes, with your loved ones, all in just Rs. 1095 + taxes!

Radisson Blu MBD Hotel Noida is fully owned and managed by the MBD Group In its twelve years of existence, the Radisson Blu MBD Hotel, Noida has quietly, but distinctly defined itself as a trendsetter and is a top performing hotel in competition set. Moreover, in 2015-16, the hotel has achieved revpar among the top 3 hotels in the entire NCR. The Hotel creates a beautiful synergy of fashion, style and hospitality with its award winning food and beverage outlets ‘Made In India’ (The Indian Restaurant), ‘RED’ (The Oriental Restaurant)  and the ‘The Chocolate Box & lounge’  along with ‘S-18’ (The 24 hrs brasserie) and ‘Espace’ spa and fitness club. The Hotel was honored with the Hospitality India award for “The Best Business Hotel in Delhi & NCR” 2009 & 2012. In just a short span of less than two years, Radisson Blu MBD Hotel Noida, received the “The Best Franchise of the year award 2005. The Hotel also received the Asia Pacific’s Best Performing Franchised Hotel of the Year for 2011 Carlson Rezidor Hotel Group, ‘Hotel of the year’ 2012 and 13 and “Responsible Business Hotel of the year 2012”, Franchised Hotel Asia Pacific by the Carlson Rezidor Hotel Group. Radisson Blu MBD Hotel Noida has also featured amongst the top 100 Best Business Hotel in India by Conde’ Nast Travelers (2012). The hotel has also been awarded the Silver certification from Earth Check; the world’s leading and largest environmental management system in use by the travel and tourism industry. The hotel has also got inducted into ‘Hall of Fame’ of Five-time Certificate of Excellence Winners on the World’s Largest Travel Site, TripAdvisor.